Made in Huntington, Used by Millions of People Worldwide

Millions of people across the United States and around the world are seeing better today, thanks to intraocular lens implants made in West Virginia.

Unlike a contact lens, an intraocular lens is permanently implanted in the eye by a surgeon. First devised in 1949, intraocular lenses replace an eye’s natural lens after the removal of cataracts.

The Huntington plant of Alcon Manufacturing Ltd. is on track to manufacture a total of seven million intraocular lenses in 2007, says James C. Baden, vice president and general manager of IOL Operations for Alcon. The plant — located on Route 2, just a few minutes up the Ohio River from downtown Huntington — has 800 employees. That makes it one of the largest employers in Cabell County.

And the plant continues to grow. Baden says a $35 million addition completed in September of last year was expected to house operations until 2010 but is already nearly full. Thus, plans already are afoot for another addition.

Approximately 100 of the plant’s workers are temporary employees. Many of those temps go on to full-time jobs at the plant.

“That is primarily our route of hire,” Baden explains. “We bring people in, evaluate their performance over a period of time in various operations and then they can bid on jobs that come open. For some specialized positions that we fill, we have to go out and recruit nationally to get the expertise required, but we hire primarily from the local workforce. We have people working here from all three states — West Virginia, Ohio and Kentucky — and some of them drive quite a distance to get here every day.”

This year, Alcon celebrates 60 years since its incorporation in 1947. The Huntington plant will mark its 30th anniversary in 2008. It began in 1978 when Dr. Jim Cook, a Huntington native working in California, returned to his hometown and opened the plant as part of what was called the California Intraocular Lens Co. (CILCO).

“At that time,” Baden says, “the standard design was a multi-piece lens. It had an optic and two small haptics or loops to keep the lens in position in the eye once implanted. That was three little pieces that you had to put together. Jim Cook recognized that physicians would soon be asking for single-piece lenses, with the haptics fused to the lens. ‘You know,’ he said, ‘we’re going to need another plant to do that.’ He also wanted to get a facility that was closer to the East Coast market. And of course he wanted to do something for his hometown.”

Baden notes that he came to the Huntington plant as a sterilization supervisor in 1983 and so wasn’t part of that early era “but we have some people who have been here nearly 30 years.”

CILCO subsequently went through a period of short-lived mergers and ownership changes until 1989 when Alcon acquired it. A global medical company specializing in eye-care products, Alcon is headquartered in Switzerland. It has operations in 75 countries and more than 13,500 employees worldwide. Its U.S. operations are headquartered in Fort Worth, Texas. In 2006, it recorded global sales of $4.9 billion.

Nestle, the giant international food firm, purchased Alcon in 1978, and then partially spun it off via a public stock offering in 2002. Today, Nestle retains 75 percent of Alcon’s stock.

When Alcon acquired the Huntington plant, it quickly recognized the high quality of the work that was done here. “CILCO had a well-deserved reputation for quality and that’s something we’ve constantly built on,” Baden says. “The people here have a strong work ethic. Give them the tools and give them a purpose and they will give you everything they’ve got.”

Jerry McDonald, president of the Huntington Area Development Council (HADCO), can’t hide his enthusiasm when he talks about Alcon’s Huntington plant and its employees. HADCO is a private organization that works to attract new jobs to the region, while helping retain and expand existing businesses.

“Alcon is the ‘gold standard’ when it comes to an existing industry,” McDonald says. “It has continually expanded and created new job opportunities and invested in new facilities in the area. They are on track to be the largest manufacturing employer in our Tri-State area. Just as important, Alcon’s workforce is world class with some of the most advanced technical skills in the region.”

Baden explains that once the Alcon Intraocular Lens Research and Development Team in Texas creates a new product, it’s brought to the Huntington plant “where we scale it up to full production. Our other location in Ireland is relatively new. It’s still getting started. They have about 100 employees and are manufacturing three models of the 80 or so different models that we manufacture here.”

A cataract is a clouding of the natural lens of the eye, a consequence of the aging process. The only treatment is surgical removal of the cataract. But in the past that generally condemned patients to wearing thick, strong, “Coke bottle” glasses after their surgery. The development of the intraocular lens changed all that. Millions of cataract patients have benefited from it.

At first, all intraocular lenses were made of hard, plastic-like material. Some still are. But today’s foldable intraocular lens are made of acrylic or silicone so soft and pliable that the lens can be rolled up and inserted through a tube with an incision so small that, unlike in the past, no stitches are required.

And, as Ben Wilson, senior director of engineering at the Huntington plant, points out, the newest model intraocular lenses being produced at the plant even have multi-focal capability, providing full range of vision from near through distance.

“We’ve come a long way,” Wilson explains. “We come from helping people with seriously impaired vision to those with slightly impaired vision, to enhanced vision with bifocal capability. And we have lenses in the clinic now that we’re about to turn loose in Europe that will rival glasses and contacts.”

A visitor to the Alcon plant is struck by the fact that it looks more like a high-tech hospital than a manufacturing facility. Most workers wear surgical-style gowns, head coverings and, in many areas, face masks that leave only their eyes visible.

“Inspection” is the name of the game at Alcon. All raw materials coming in to the plant are placed in a quarantine area until they pass muster. At regular points in the production process, samples are checked and every one of the thousands of lenses produced daily is given a final inspection before it’s shipped. A computer bar code stamped on each individual package assures there’s no doubt when and where the lens it holds was produced.

As might be expected, certain areas of the plant are designated “clean rooms” where even the smallest speck of dust or one stray human hair is unacceptable. But even more mundane areas of the plant, such as the employee cafeteria, are spotlessly clean.

A central corridor stretches the length of the new addition, with large windows providing commanding views of the manufacturing process, where highly automated pieces of equipment – robots, if you will – do much of the work. Parts from several of the machines have been crafted on high-tech equipment at the Robert C. Byrd Institute’s Huntington Manufacturing Technology Center.

In addition to working with RCBI, Baden points out that Alcon has other ties with Marshall. “We partner with Marshall to offer courses on site at Alcon every semester, and many of our employees have degrees from either Marshall University or Marshall Community and Technical College, and half the members of our senior management staff have MBAs from Marshall. Besides myself, that group includes Materials Manager Mike Saouan, Human Resources Manager Linda Persun and Information Technology Manager Jim Curtis.”

“Ours is an award-winning manufacturing team,” Baden says “and a big part of why that’s so is the fact that our workers care. They realize they’re not just here making widgets that are going to go on a store shelf somewhere. They know the product they’re making is something that’s going to help improve somebody’s life. Maybe somebody they know. Maybe somebody in their own family. Maybe their own grandmother. We have no way of knowing where our products will end up. After all, all of us at some point in our lives could be viable customers for what we do.” 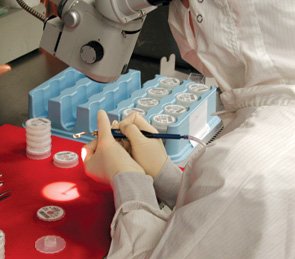