You may be aware of the significant contributions of Rosie the Riveters, but you may not know that during World War II, working alongside Rosies in factories, shipyards and munitions plants was another essential group of women: Wendy the Welders.

In fact, during wartime, nearly 25 percent of U.S. welders were women – the largest percentage ever. Today, that number has dwindled to about 3.5 percent, according to the Bureau of Labor Statistics, which classifies welders with the related occupations of cutters, solderers and brazers.

That presents a problem. A recent study by Deloitte and the Manufacturing Institute found that nearly 2.1 million manufacturing jobs – including welding positions – could go unfilled by 2030 because of a lack of skilled talent. The same study recommended that industry greatly expand efforts to recruit and retain women and other underrepresented groups as one of the best ways of bridging the skills gap.

Brittany Carter of Huntington is one of a growing number of female students studying welding at RCBI. But she’s not intimidated by the prospects of pursuing a career in a male-dominated industry. In fact, it’s a motivating factor.

“I wanted to become a welder because all of the guys I talked to about it told me I couldn’t do it,” Carter said. “It pushes me to be stronger, up my expectations as a woman. It’s a male-dominated industry so we’re going to have to work harder, but it’s going to be worth it at the end of the day. That excites me.”

Classmate Jayne Polvinen of Lavalette echoed Carter’s sentiments. “I’m sure we might get some crap, maybe even get harassed a little bit, but it will only push me to be better.”

Polvinen is not your typical student. The 32-year-old said she worked a series of “dead-end” jobs after high school before recently enrolling in RCBI’s welding program as a way of improving her situation. “I wanted something that would pay better, that wouldn’t bore me like a typical 9-to-5 job would. I had taken welding in high school when I was about 15 and though I never got back into it, I always remembered it.”

“Definitely the hands-on thing,” interjected Polvinen. “I don’t want an office job. I want to be out there working with my hands.”

Turner said she also likes the fact that because welders work in various industries and are in demand across the country, the vocation offers the opportunity for travel. “When I first chose welding, I wasn’t aware of the demand, but I was aware that you can work anywhere: on cars, in shipyards – even underwater,” said Polvinen. “If you don’t like doing one thing, welding allows you to move on to something else.”

All three women said they find welding satisfying but that it requires – perhaps above all – patience.

“You have to know when to slow down,” Carter said. “I keep telling myself, ‘Brittany, you gotta slow down, you’re going a little too fast.’ But you get used to it.”

Polvinen agreed. “I like to move really fast, get things done,” she explained. “Welding definitely requires patience – and perseverance. You can’t let your patience run out. You just have to keep going until you get it done.”

Turner said that the patience welding demands is due, in large part, to the precision that the skill requires. “For example, you have to be really steady not shaky when you’re doing overhead welding. I have to stop myself, take a few deep breaths, just calm down and remind myself that it’s not going to be easy every time.”

Brad Lowe, RCBI welding instructor, said he is impressed with how these three first-year students , who currently are studying stick, plate and fillet welding, have progressed in just a short time.

Carter, Polvinen and Turner are the first students in their class to earn welding certifications from the American Welding Society (AWS). All three earned their SMAW (stick) fillet weld-plate certification on the same day earlier this month.

“These ladies are the three best welders in the class. They really are,” Lowe said. “Not to take anything away from the others. The guys aren’t very far behind, but these ladies are really dedicated. They’re just a little ahead of everyone else.” 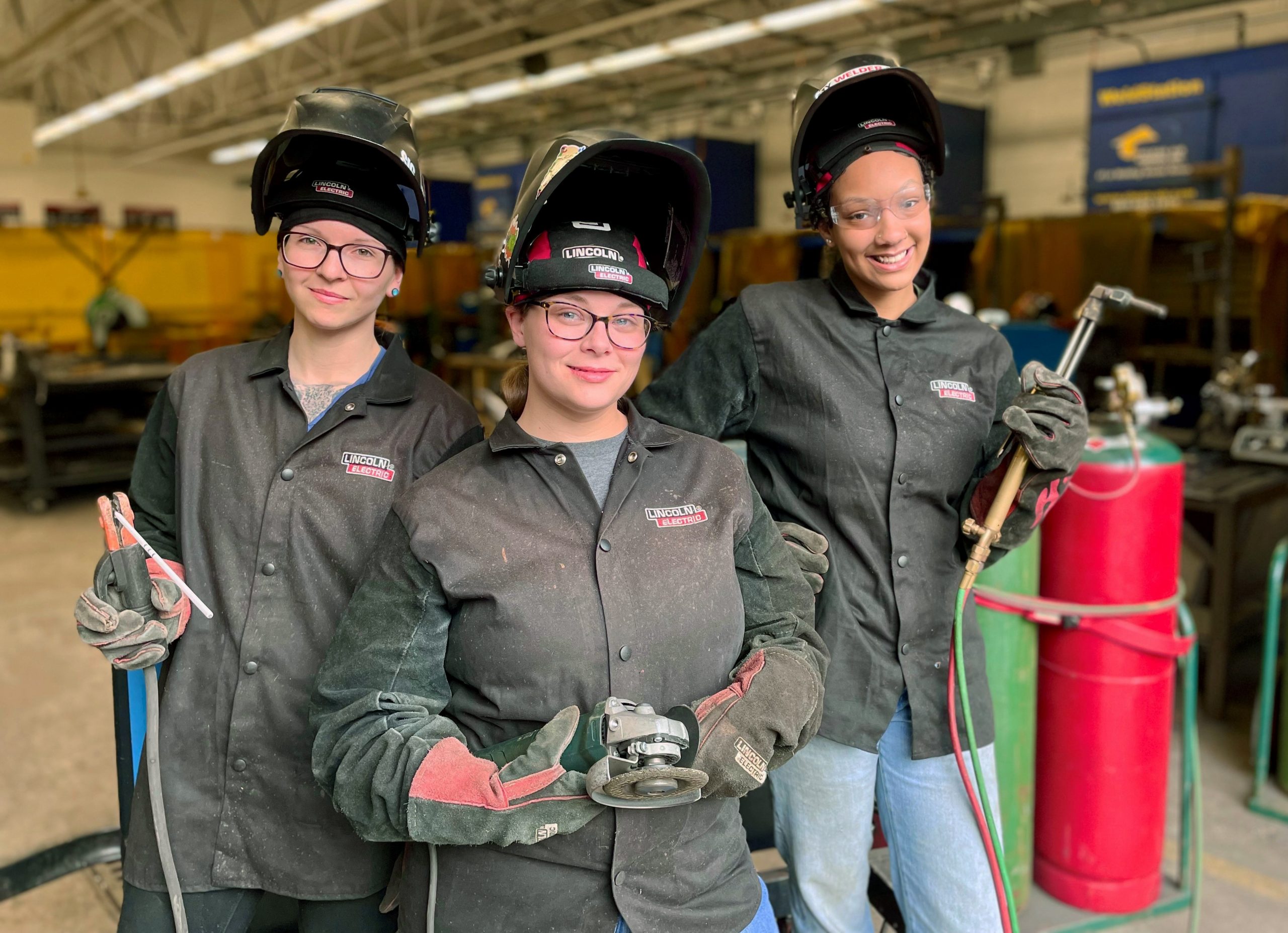