Lean Manufacturing Made Toyota the Success Story it is Today

Investing in our Economy

One of the world’s great manufacturing success stories is the Toyota Production System (TPS) — the philosophy which organizes manufacturing and logistics at Toyota, including its interaction with suppliers and customers.

TPS is known more generically as “lean manufacturing.” It was largely created by Toyota founder Sakichi Toyoda, his son Kiichiro Toyoda and Toyota chief engineer Taiichi Ohno. The primary goal of TPS is to eliminate waste, called “muda.” The “seven wastes” is a tool to further categorize “muda.”

RCBI can assist with Lean implementation. Click for information.

To eliminate waste, it is important to understand exactly what waste is and where it exists. While products significantly differ between factories, the typical wastes found in manufacturing environments are quite similar. For each waste, there is a strategy to reduce or eliminate its effect on a company, thereby improving overall performance and quality.

The seven wastes are:

The first step in achieving the goal of becoming a lean manufacturer is to identify and attack the seven wastes. As Toyota and other world-class organizations have come to realize, customers will pay for value-added work, but never for waste.

Toyota has long been recognized as the automotive industry leader in manufacturing and production. This system, more than any other part of the company, is responsible for having made Toyota the company it is today.

It’s ironic that Toyota got its inspiration for the production system in the United States. This occurred when a delegation from Toyota visited the United States to study its commercial enterprises. They first got inspiration for their production system at an American supermarket — a Piggly Wiggly, to be precise. They saw the value in the fact that the supermarket only reordered and restocked goods once those items had been bought by customers.

Toyota applied the lesson from Piggly Wiggly by reducing the amount of inventory it would hold to a level that its employees would need for a small period of time, and then subsequently reorder. This is highly representative of a Just-In-Time inventory system.

First — Optimize each individual step of the manufacturing system. In other words, make each part as efficient as possible to get the most from the least.

Second — Make a product with no flaws or defects. This ensures that each part of the production line will go as planned.

Third — Reduce the manufacturing cost. The cheaper it is to make the product the larger the profit for the company.

Fourth — Make a product that is demanded by consumers. If there is no demand then there is only money lost.

Fifth — There needs to be flexibility in the system. Things will not always go as planned and the system must be flexible enough that it can be modified easily.

Sixth — There needs to be a strong and reliable relationship between customers and suppliers. Since Just-In-Time manufacturing means there is virtually no extra stock or materials on hand, companies need to rely on each other to be reliable and on time.

While having low inventory levels is certainly a key component to the Toyota Production System, just as important are the simple and low-tech fundamental pillars of the system — strict adherence to procedures, constant improvement (called “kaizen”), getting to the root of problems and respect for line workers.

Toyota officials say the key to the system is that it taps the knowledge and insights of team members while providing them with a lot of training and responsibility. It is only by capitalizing on employees’ creativity that Toyota can continuously improve.

The fact remains that in manufacturing some jobs are dangerous or difficult. The Toyota Production System reduces waste by focusing on “reducing difficult jobs.”

Difficult jobs are identified as those tasks that require special skills from team members. Those requiring special skills cause variation and inconsistent work resulting in safety or quality issues.

All jobs are ranked in three categories — green, yellow and red. The goal is to improve jobs to the green category which means the difficulty has been eliminated.

Some of these kaizens (improvements) have been achieved through simple process improvements, such as moving assembly tools to a proper location. Other processes – such as loading raw material — have required utilization of robots to eliminate the difficult job altogether.

Clearly, Toyota is doing something right. As any business leader knows, success does not happen by accident. It is the result of commitment, passion and the pursuit of excellence. 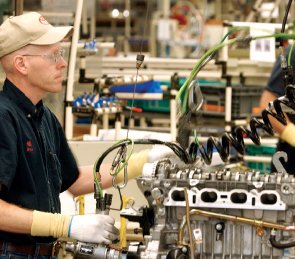