Over more than 35 years as a band instrument repair technician, Gary Gini has seen it all:

Dents and dings. Sticky valves and stuck slides. Jammed mouthpieces. Broken solder joints. Twisted keys and rotted pads. Foreign objects such as quarters, earbuds, erasers and Minions. Even mangled masses of metal, such as the time a youngster fell down a flight of stairs and flattened her French horn 24 hours before flying to Finland. (Gary worked his magic and got the girl and her horn to Finland on time!)

When it comes to children and musical instruments, “there tends to be a high incidence of gravity,” leading in part to his long career, Gary said with a chuckle.

While band instrument repair and maintenance form the backbone of his business, Gary has worked with many professional musicians in world-renowned orchestras including the New Zealand Symphony, Johannesburg Philharmonic and the Sydney Symphony to modify and customize their instruments, enabling them to perform at their peak.  Gary even has worked with musical greats such as world-renown jazz musician Hugh Masekela and the late rocker Eddie Money.

Gary once received a frantic call hours before the singer/songwriter was set to perform after Money’s alto and tenor saxophones toppled off an 8-foot stage and landed on a concrete floor. Gary rushed to the rescue and somehow (and somewhat frantically) returned the instruments to working order in the nick of time, with just enough to spare that he was invited to hang out with the appreciative star and his band over dinner.

Gary has traveled the world plying his trade. He’s worked in South Africa, Australia and New Zealand, as well as Canada and the United States. It was love that brought him to West Virginia.

The Canadian native first met his future wife, Julie, of Roane County online. After some back and forth between Saskatchewan and the States, Gary, considerable talents in tow, moved to West Virginia to be with Julie. They married in 2019 and set up shop in Spencer in 2021.

The couple credits Will Miller, then business coach (and now deputy director) of the West Virginia Small Business Development Center, with helping them develop and execute a business plan, and secure financing to fund  the startup of their business, the Instrument Lab LLC.

Part of Gary and Julie’s business plan concerned opening a band instrument repair and service business, while the greater focus was on creating a business that manufactures innovative tools and accessories for the repair industry.

“How many times have I wished I had a tool that would do something that wasn’t available,” Gary explained. “I’ve always wanted to actually make the tools that make it possible to repair instruments.”

Miller recommended he reach out to the Robert C. Byrd Institute (RCBI) for assistance in bringing his ideas to life.

Gary began working with RCBI staff virtually and in-person to create designs and generate computer drawings of his ideas. The first project was the DentOut Magnetic Burnishing System™ that uses powerful magnets to remove dents from brass instruments. The Instrument Lab’s proprietary Ultra High Molecular Weight SlipDiscs™ allow the tools to glide over the brass without scratching the metal.

Gary supplied RCBI Design Engineer Morgan Smith with a hand-drawn sketch and basic design parameters for the invention. Smith used Solidworks modeling software to generate a three-dimensional rendering then created a computer file from which Gary generated a prototype on his in-shop 3D printer. As refinements were needed, Smith quickly modified the computer files to produce additional prototypes.

“The rapid iteration process that RCBI provides is so important,” Gary said. “Traditionally, you might have to spend three months and $6,000 having dies made to produce something only to find that it doesn’t work.”

The latest project is a cordless, rechargeable Power Handle to be used with the Instrument Lab’s LightTubes™ leak light system. The different lights are used to check for air leaks in flutes, saxophones and other woodwind instruments. Gary’s innovation earned him an RCBI Early Stage Funding award, which provides him with free technical assistance and access to an array of technology.

The internal components that secure the device’s electronics are 3D printed from computer-aided-design files that Smith generates from Gary’s initial concept.

Gary tests the prototype for form, fit and function, then Smith tweaks the design and sends Gary a modified computer file from which he generates a new prototype. Smith worked with Gary to design the computer file in such a way that it reduces the amount of material used, thus lower production costs and saving time.

From his basement workshop he’s dubbed “the imaginarium,” Gary has brought more than 12 products to market in the past 18 months. He has ideas for nearly two dozen others that will soon be available to purchase.The Instrument Lab’s flagship product, and the one first brought to market is the Total Station™, an all-in-one system that combines several tools of the trade such as an electro conductive heating tool, a differential pressure tester, a programmable hot air wand and a leak light system into a compact bench-top device. “The impetus for all of our tools is to allow technicians to work more productively and more profitably by using our tools,” he said.

To supplement the growing array of manufacturing equipment in his own workshop, Gary maintains a monthly membership in RCBI’s Maker Vault, which gives him access to a variety of high-end, precision equipment and expert assistance. “We have some of our own equipment, but nothing near the tools and expertise that RCBI offers,” he said.

Gary initially used a laser at RCBI to manufacture the SlipDiscs™ for his DentOut Magnetic Burnishing System™. The aluminum face panels for the Total Station™ are cut on RCBI’s large 4,000-watt laser cutter, which saves Gary 75 percent over what he was paying to purchase them from a third party. Meanwhile, the metal casings for the new cordless leak light system are machined on a computer-controlled lathe at RCBI Huntington.

“RCBI has been an absolute game-changer,” Gary said. “I’ve gone from pregnant with all of these ideas and having no reasonable way of realizing them to being able to make world-class, industry-advancing products with the assistance of Morgan (Smith), Deacon (Stone, director of the Center for Innovation) and everyone at RCBI.”

The Instrument Lab, one of just a handful of musical instrument repair tool makers in the world, sells its innovative products across the United States and around the globe in locales including the United Kingdom and New Zealand. Its customers include Conn-Selmer, a subsidiary of Steinway that is the largest U.S. manufacturer of band instruments, which just purchased five units of the Total Station™.

The Instrument Lab’s growing business has five lines, just like a musical staff. What started as a brass and woodwind instrument repair shop has expanded to include the Instrument Lab’s expanding product line of repair tools and accessories. The company recently became an affiliate of RentMyInstrument.com, offering flexible, online band instrument rentals. The Instrument Lab will soon offer a curated selection of high-quality accessories for the band instrument market as personally selected by Gary, based on his years of experience and knowledge. Finally, Gary acts as a consultant, coach and trainer to music stores and repair technicians nationwide. He spent several weeks in 2021 providing one-on-one repair training to a technician in Iowa as well as consulting with a store on the selection of tools and equipment to buy for its startup repair business.

As Gary and Julie work to scale their business, the innovator and master repair technician said it’s important to keep the art of instrument repair alive, and teach others the trade just as two German masters taught him many years ago in Canada. “What I’d love to be able to do is find an apprentice. I think it’s absolutely important for me to pass on what I know – and the passion for it – to the next generation.”

To learn more about the Instrument Lab, visit the website at www.the-instrument-lab.com. 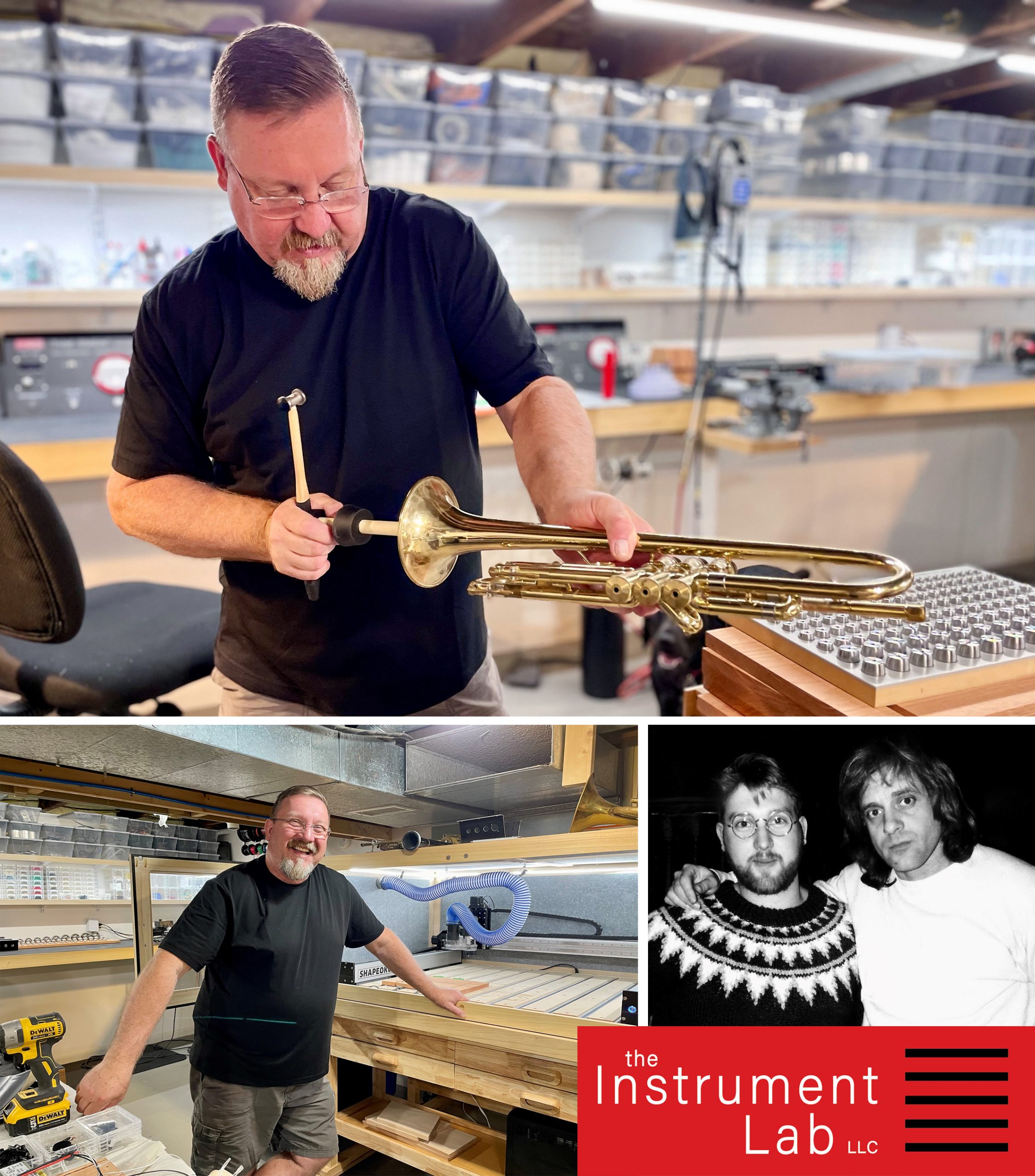