Even the sweetest of small businesses can face challenges.

When Faye Dunford, the namesake of Mama Faye’s Fudge & Confections of Lewisburg, decided to whip the treats loved by her grandchildren into a small business, she wanted to make sure she got the details as right as her fudge. She knew she wanted her logo embossed on her confections, but the big question was: Could it be done easily on hand-crafted treats?

“Many times, we small business owners have a dream, and we want to go forward with it, but we need to do a little research and figure things out first,” Dunford said.

Dream in one hand, and whisk in the other, Dunford got to work in the early days of the pandemic to put Mama Faye’s on the map. A local newspaper article led her to two classes for entrepreneurs. One was offered by WV Hive, a program of the New River Gorge Regional Development Authority that gives small businesses a leg up. The other was offered by the Robert C. Byrd Institute (RCBI) at Marshall University, which provides entrepreneurs and manufacturers with the tools they need to innovate.

Dunford said she found both courses to be valuable — WV Hive helped her establish her business and RCBI helped solve a dilemma by creating tools to brand her treats.“The classes were really, really good. I learned so much, and I asked a lot of questions.”

In her classes, she learned about grants, and one — an early-stage funding award from RCBI — paid for her to access the talents of the organization’s design engineering team. The goal: to turn the Mama Faye’s Fudge & Confections logo into a food-safe mold. The result: A mold and then some.

Morgan Smith, RCBI design engineer, led the project, which started as a request for a candy mold that became a quest for a logo stamp that evolved into a quest for a state-shaped cookie cutter/mold. Then at some point, a bar-shaped mold was created, too.

It serves the customer to sometimes break the mold they have of their ideas. As it turned out, Dunford loves her options for candy branding provided by RCBI’s design engineering team. As she continues to experiment with her mold-stamp-cutter options she learns something about the process and her tools.

Still, candy doesn’t always cooperate. “I found that when fudge is ready to pour, you have to pour it. Once it’s in the pan, you can’t move it or you lose the smoothness of it… If you don’t get it right the first time, you’ve got a mess,” Dunford said. “Morgan (Smith) was outstanding to work with and he was very understanding of the changes I made to the molds. I highly recommend RCBI for anyone starting a business. Work with them and take their courses, especially if you are just getting started.”

Smith also is pleased with where the quest for the mold landed, and it’s not just because of the many samples of Mama Faye’s fudge Dunford brought to in-person meetings. “This project was fun. Working with Mama Faye was phenomenal. She’s one of those small businesswomen who is just a joy to be around,” Smith said.

“I got to experiment and learn a lot with her project,” he explained. “We used a technique in making those silicone molds with her logo that I’d never used before, so it was neat experimenting with it. It ended up that she went with a 3-D printed design, which worked out great, too.”

Mama Faye’s Fudge & Confections — peanut butter fudge (made with almond milk), chocolate fudge, peanut butter cups, and turtle candies — are sold at Amy’s Market in Lewisburg and The Hub in Hinton. Her sweets will make their debut this August at the State Fair of West Virginia. Dunford will sell them in the Gus R. Douglas Department of Agriculture Building. To contact Mama Faye’s, email or call 256.226.4581. Dunford said she hopes to establish an e-commerce website soon. 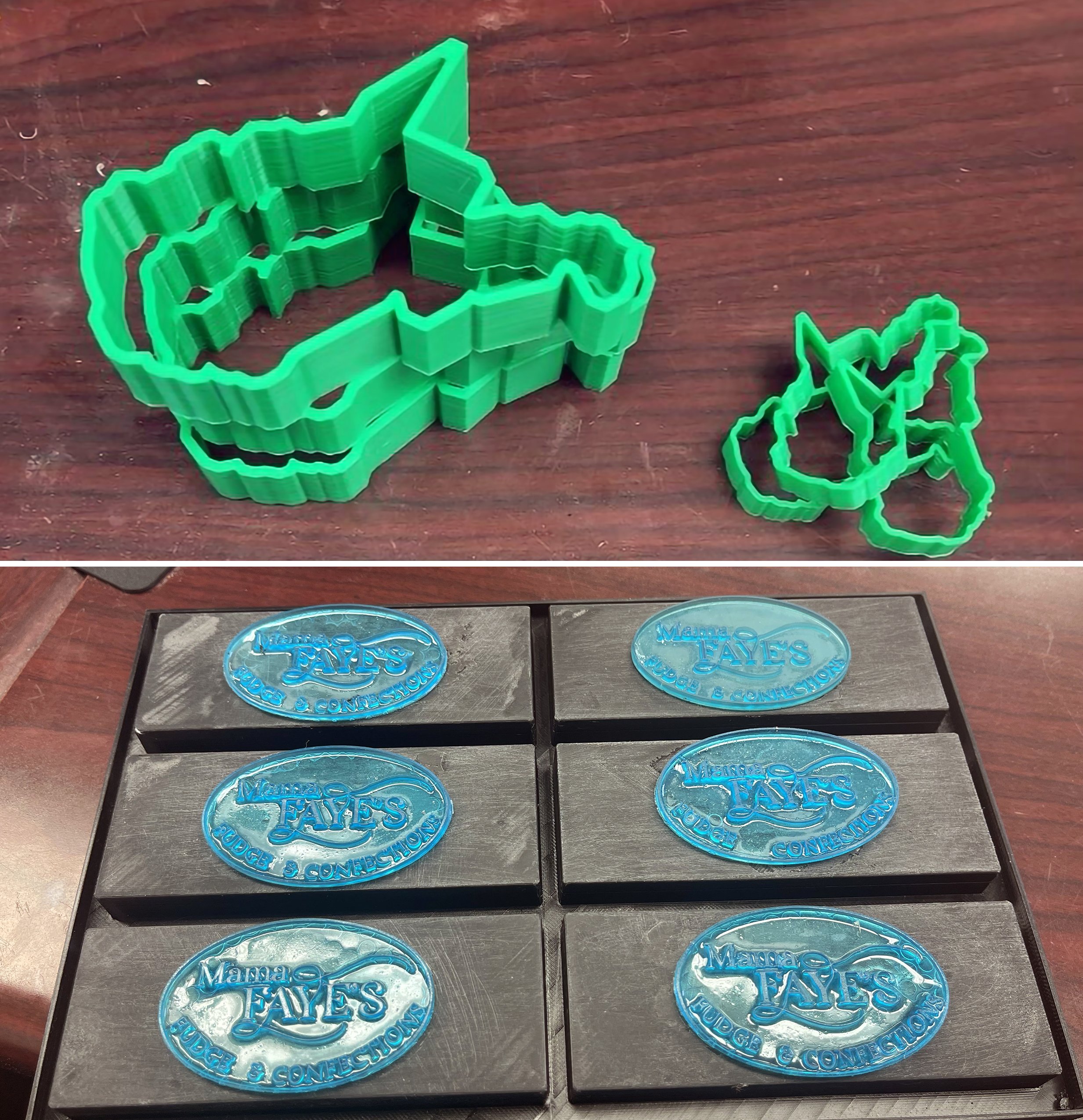 END_OF_DOCUMENT_TOKEN_TO_BE_REPLACED

U.S. Sen. Shelley Moore Capito and Marshall President Brad Smith met with owners and employees of West Virginia manufacturing operations last week to learn more about how they benefit from the workforce development programs and technical assistance available at the...